The demand for highly efficient and low-polluting spark ignited (SI) engines has promoted a recent development strategy referred to as “downsizing”. In general it consists in a decrease of the displacement of the engine without substantial losses in engine performance. To meet those requirements a considerable increase in engine efficiency associated with turbo charging are necessary. Thermodynamics yield that a gain in efficiency is achieved by increasing the compression ratio of the engine. Thus development trends focus on turbocharged engines simultaneously featuring high compression ratios.

As a consequence the prevailing thermodynamic states are characterized by higher pressures coming along with increased temperature levels in comparison to conventional engines. Besides the demanding requisites with respect to engine design additional challenges related to the combustion process occur.
Such engines frequently exhibit strong engine knock which can be seen as a direct implication of the elevated thermodynamic state. However a more serious and far more interesting phenomenon emerges at low engine speeds and high loads. This rather unexplored abnormal combustion mode consists in uncontrolled auto-ignitions of the charge before the end of the compression stroke and it occurs seemingly at random. These so called pre-ignitions have already been detected in different types of engines in the past, although at much lower frequency and the corresponding thermodynamic states were less critical. Thus the phenomenon was assessed as being rather non-hazardous.

The recently observed pre-ignitions still occur sporadically however the majority of the recorded events subsequently lead to extreme engine knock. The amplitudes of the resulting pressure oscillations develop an enormous damage potential thus a small number of events can provoke severe damages or even a destruction of the engine.
Figure 1 displays recorded pressure traces of a regular combustion cycle and a cycle with pre-ignition. The considerable engine knock immediately following the premature ignition is rather distinctive. In addition it can be seen that pre-ignition occurs before the piston reaches the top dead centre (TDC, 0° CA in the figure) position. Considering the regular spark timing (6° CA ATDC) ignition is triggered way before the aimed start of ignition.
The fact that pre-ignition is predominantly observed in turbo charged SI engines featuring high compression ratios suggests that the corresponding thermodynamic conditions display a governing influence on the occurrence of premature auto-ignition. If this assumption holds pre-ignition is hindering a further increase in engine efficiency and thus represents a physical boundary to the downsizing approach. From these considerations an evident necessity for a fundamental understanding of the processes leading to pre-ignition arises. 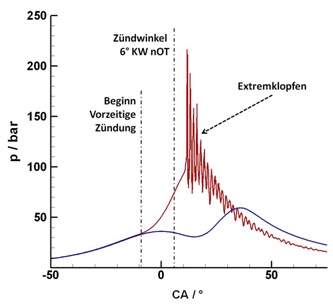 
This work aims at identifying the fundamental processes triggering uncontrolled and premature auto-ignitions. In a first step any mechanism potentially promoting auto-ignition in a fuel-air mixture is determined. Figure 2 contains a concise representation of the possible sources of auto-ignition merged into a tree structure and categorized according to their underlying physical properties. This approach allows a systematic investigation of the phenomenon with the purpose of evaluating the potential of any of those mechanisms to promote a premature auto-ignition under engine relevant conditions.

Figure 2: Potential sources of an auto-ignition in fuel-air mixtures

The investigations are performed in cooperation with the “Institut für Kolbenmaschinen” (IFKM) leading to a cumulative research approach involving detailed numerical simulations of auto-ignition processes as well as elaborate experiments in a close-to-production test engine. The evidence obtained from the simulations support the design of targeted key experiments providing distinct insights on the governing processes in the combustion chamber.


The numerical simulations are based on a one dimensional combustion model. The confinement to rather simple geometries provides the possibility to take into account all of the involved physical and chemical processes in a very detailed way. In the majority of the simulations resolving complex geometrical structures some processes and in particular the chemical kinetics is represented by rather rudimentary models to save computational effort. Due to the non-linear behavior of auto-ignition and the strong dependence on thermodynamic conditions a detailed consideration of chemical kinetics is inevitable for the investigations on pre-ignition. The results of an exemplary simulation of a hot particle triggering an auto-ignition in the ambient gas during a compression stroke are depicted in Figure 3. It shows the evolution of the temperature of the particle and in the surrounding gas. 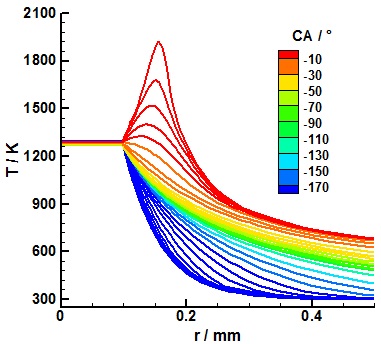 Figure 3: Simulation of ignition at a hot reacting solid particle during the compression stroke.


Finally the comparison of numerical findings to experimental evidence reveals in how far the processes in the real engine comply with the behavior predicted in the numerical studies. If the results disagree distinctively, the considered scenario has to be evaluated as a rather improbable cause in terms of pre-ignition.