An example of a tracer LIF image is shown. It was made in the combustion chamber of the abovementioned two-stroke experimental engine. The tracer is mixed into the fuel, thus providing information about the fuel-air distribution in the unburned mixture. Given a known homogeneous mixture in the combustion chamber, the tracer LIF helps to obtain information about the ignition sites and the ignition’s propagation.

The goal in the development of modern internal combustion engines is to decrease emissions and fuel consumption, without thereby reducing performance.

This makes a detailed understanding of the ongoing processes taking place in the internal combustion engine’s combustion chamber before, during and after the combustion indispensable. Optical methods such as laser-induced fluorescence (LIF) offer new options for investigating these processes directly in the combustion chamber. Together with advanced numerical methods, this provides engine diagnostics that can help to develop more efficient and lower-emission engines. One promising combustion process is the self-ignition of homogeneous fuel-air mixtures (HCCI), which will be investigated here in more detail.

In HCCI combustion, a lean homogeneous fuel-air mixture is ignited through compression. With the help of a combination of numerical studies and LIF experiments, it will be investigated to what extent spatial temperature and mixture fluctuations can be used to regulate ignition and combustion in engines with self-ignition.


The simulation involves the use of detailed reaction mechanism as part of the investigations. Studies have shown that a homogeneous reactor is suitable for describing the engine’s combustion chamber under the conditions that occur during this combustion process. One option of improving this 0D model without the need for massive computing times, consists of modelling the temporal variation in the cylinder’s charge by means of several interacting reactors, using detailed reaction kinetics. With this model, the effect of the gas temperature’s mean and standard deviation of the gas temperature on the mean yield and on the progress of combustion is investigated under typical engine conditions. It has been shown that the start of ignition and the heat release duration can be controlled across a wide range by quite small changes in the mean and the standard deviation. 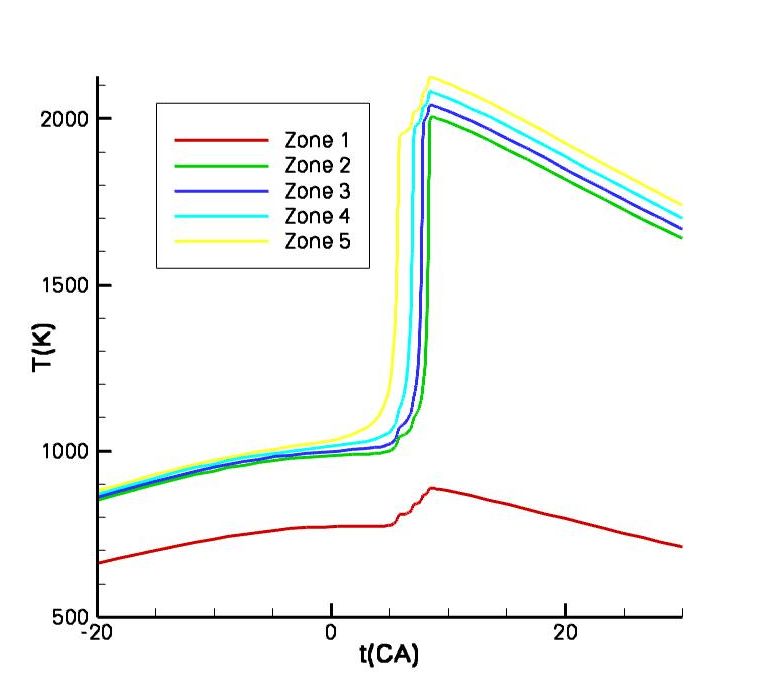 As an example, the temperature curves of 5 zones are shown in firgure 1 for the simulation of a four-stroke experimental engine. At the start of the simulation, these differ only in the temperatures of the individual zones. The zones represent different regions in the engine’s combustion chamber. The various curves allow predictions to be made about the conditions under which emission arises.

LIF investigations are conducted using a compression-ignited two-stroke experimental engine in order to validate the numerical models. The therefore used and modified cyclinder head is shown in figure 2. 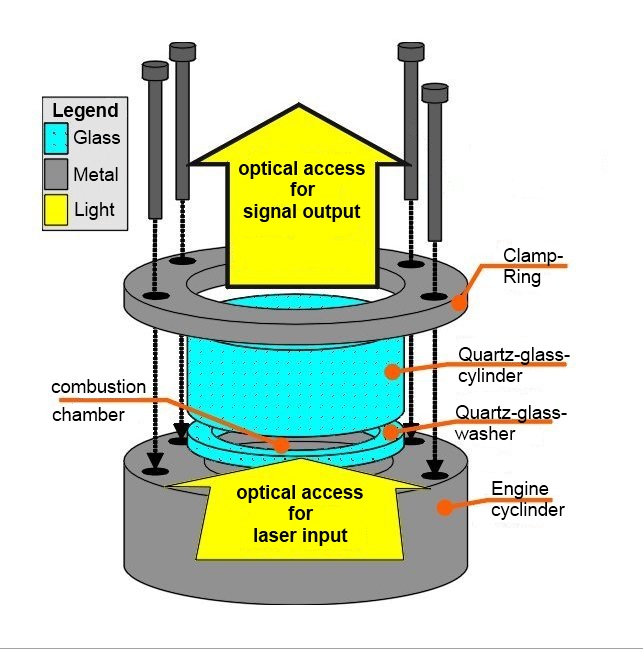 The optical access ports of the two-stroke experimental engine can be seen in the illustration. The laser beam is coupled into the combustion chamber through a quartz glass ring. Certain species typical of combustion, e.g. OH radicals, are excited, and their fluorescence is recorded by an ICCD camera at right angles to the light-section.

An example of three tracer LIF image are shown in figure 3. They were made in the combustion chamber of the abovementioned two-stroke experimental engine. The tracer is mixed into the fuel, thus providing information about the fuel-air distribution in the unburned mixture. Given a known homogeneous mixture in the combustion chamber, the tracer LIF helps to obtain information about the ignition sites and the ignition’s propagation.