Modern engine concepts that promise high efficiency and low emissions like homogenous charge compression ignition (HCCI) still suffer from poor understanding and control of ignition and flame development. It is therefore highly desirable to transfer laser-induced-fluorescence (LIF) based fuel-imaging techniques that have proven indispensable in SI (spark ignition)-engine research to HCCI or Diesel environments in order to obtain quantitative information about the fuel and temperature distributions as well as on the onset of fuel decomposition prior to second-stage ignition. From an experimental point of view, there are two major differences in these auto-ignition concepts as compared to SI concepts: higher temperatures combined with higher pressures and ignition due to the onset of (low-temperature) chemistry rather than an electric spark. Therefore, during the application of tracer-LIF imaging in these environments, several new questions have arisen:

None of these essential questions has yet been studied comprehensively. The over-all goal of this project is to determine suitable fuel blends or fuel/tracer mixtures for quantitative imaging of the mixing and pre-ignition process in HCCI and Diesel combustion. This project can be subdivided into three areas according to the three questions mentioned above:

The general aim is the development of chemical models that predict the decomposition kinetics of fluorescent tracers and their influence on the combustion characteristics of standard fuels. To this end, new experimental data will be included into existing models and based on the models reactions will be determined where largest uncertainties call for further experiments. A close interaction of experts in the field of modeling and experimental determination of kinetics data is thus essential (Fig.1). 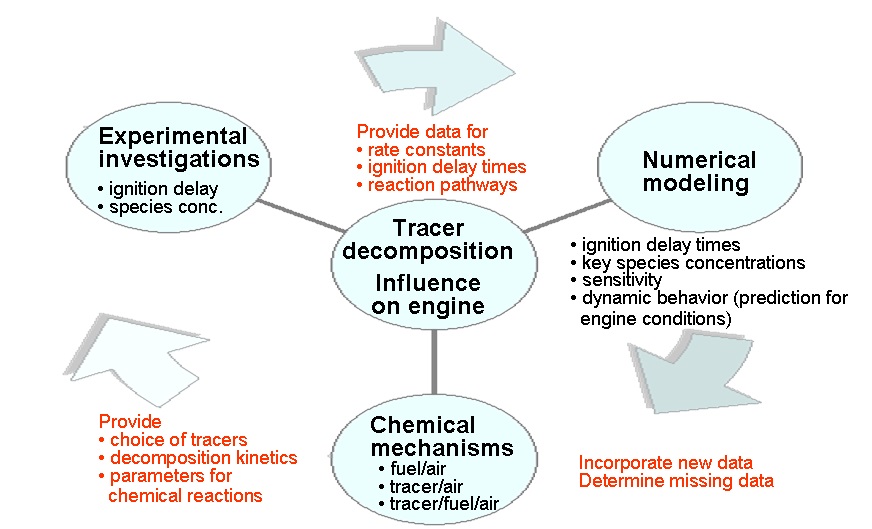 Fig. 1: Schematics of the interaction between modeling (ITT, Karlsruhe) and experiment (IVG, Duisburg).

For several molecules that are typically used as fluorescent tracers for gasoline-like fuels such as pure acetone, toluene, and biacetyl, the decomposition and combustion kinetics are fairly well known and their spectroscopic properties are well known up to moderate temperatures. Therefore, there is a large interest to use the available knowledge and to expand the applicability of these tracers for auto-igniting high-temperature mixtures. Only few data, however, exist about the decomposition, ignition and combustion behavior of these materials in the presence of fuels. For gasoline-type fuels the focus will be set on studying the decomposition kinetics in tracer/fuel mixtures.

Ignition delay times have been measured in a heat able high-pressure shock tube under engine relevant conditions. The shock tube has a constant inner diameter of 90 mm. The driver section is 6.4 m long and the driven section has a length of 6.1 m. The two parts are separated by an aluminum diaphragm with typically 4 mm thickness. The maximum test time is extended up to 15 ms by driver gas   tailoring [1].

The principle of the determination of tign from the CH* and pressure signals is shown in Fig. 2 for an example signal trace for stoichiometric toluene/iso-octane (10/90%vol) ignition in air at p5 = 42.0 bar and T5 = 821 K. The steepest increase in CH*-chemiluminescence intensity as well as the pressure rise is observed at 4.6 ms after arrival of the reflected shock wave as indicated by the dashed tangent at the CH* signal. The ignition delay time is defined as the delay between the arrival of the reflected shock wave (t0) and the intersection of the steepest tangent with zero chemiluminescence signal. 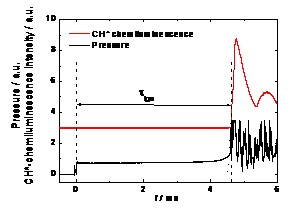 Fig. 2: Typical pressure and CH* chemilumenscence profile for a stoichiometric n-heptane/toluene (90/10 vol%) /air mixture with T5 = 821 K and p5 = 42.0 bar. The ignition delay time is defined as the delay between the arrival of the reflected shock wave and the extrapolated tangent to the steepest increase in CH*-chemiluminescence signal.

For the simulation studies, the Toluene Reference Fuel (TRF) mechanism of Andrae et al. [2]  was used, containing 633 reactions of 137 species. This mechanism has been shown by its authors to well predict ignition delays for a range of engine-relevant pressures and temperatures. Because the mechanism is only semi-detailed in nature (it is based on skeletal mechanisms for iso-octane and n-heptane), additional numerical studies were also performed using the Lawrence Livermore PRF (primary reference fuel) mechanism [3], augmented by a toluene submechanism of Andrae et al. [4]. This was done to ascertain whether results found with the semi-detailed mechanisms were also found when the more detailed scheme was used in the simulations.

Various numerical simulations were performed for comparing predicted ignition delay times with the shock-tube measurements. The calculations were based on a homogeneous reactor model with detailed chemistry according to the TRF mechanism [2]. An adiabatic constant-volume model was used in these simulations; the governing equations describing this model are given in [5]. Several simulations were performed in a parametric study with initial conditions set according to the shock-tube experiments, covering a range of fuel compositions, temperatures, and equivalence ratios [6]. The fuel compositions studied included pure iso-octane, pure n-heptane, mixtures of iso-octane and   n-heptane, and mixtures of these fuels with toluene. This allowed to construct global ignition delay time maps (Fig.3) which exhibit the influence of toluene on the ignition behavior of the reference fuels.

The decay of toluene as a fluorescing tracer under engine conditions was analyzed by modeling studies based on homogeneous reactor simulations. The temporal volume history imposed onto the fuel/air mixture by the crank-slider mechanism of a reciprocating engine was used as an external constraint for the system, thus simulating the crank-angle-dependent pressure/temperature history of the fuel/air mixture. These simulations delivered temporal traces of pressure, temperature, species concentrations, and heat release rate. A range of simulations with parametric variations were performed to study the sensitivity of the results with respect to engine operation parameters (engine speed, initial temperature of the cylinder load, compression ratio, heat loss). 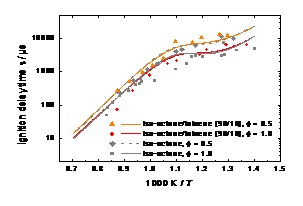 Based on the comparison of simulations and experiments, the TRF mechanism has been con?rmed to realistically predict the ignition delays of iso-octane, n-heptane, and toluene, and also the in?uence of toluene on the ignition behavior of iso-octane and n-heptane within the investigated temperature, pressure, and equivalence ratio range. Based on the mechanism, therefore, a qualitative view of the ignition delay of TRF fuels (iso-octane/n-heptane/toluene mixtures) can be computed. Such a view is provided in Fig. 5, which shows ternary diagrams of ignition delay times vs. relative amounts (mol%) of the three components.

Along each side of the triangle, one of the three components is not contained in the mixture (as indicated), while the relative amounts of the other two components are varied between 0% and 100%. The two diagrams correspond to two temperatures (1000 K and 700 K), at a pressure of 40 bar and u = 1. They were computed using the semi-detailed mechanism, by performing ignition delay time simulations at in total 55 operating conditions.